Ferfal on the Argentina's 2002 Collapse 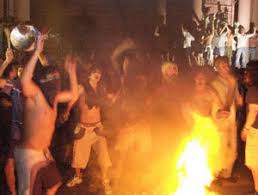 Rioting, protesting in the streets, chaos, political and social unrest.

This describes the collapse of the Argentinian economy and the hyperinflation of its currency. In 2002 the people of Argentina experienced such a scenario and I talk with Fernando Aguire who blogs from Buenos Aires about what is was like to experience it firsthand and what he thinks are similiarities and differences in our situation in the US.

Yesterday, while I was at work, my sister stole my iPad and teestd to see if it can survive a twenty five foot drop, just so she can be a youtube sensation. My iPad is now broken and she has 83 views. I know this is totally off topic but I had to share it with someone! http://ohayuscgd.com [url=http://acxpqqnduv.com]acxpqqnduv[/url] [link=http://oqygbqarzn.com]oqygbqarzn[/link]

Intmroafion is power and now I'm a !@#$ing dictator.

Hi Steve,
Another interesting podcast, well done. I have been aware of the Argentinian situation for a while as well as a few other examples (a former Yugoslavian friend has told me some amazing tales) but good to get some info from a person on the street level.

One thing that will make any future economic \'collapses\' quite different from the one Argentina experienced is that of declining energy availability. Your guest says that we can always return or regrow to normal of sorts but isn\'t this only possible with cheap energy?

All the best for the garden and keep up the good work with the show.
Olmec

Steve, Great podcast. I hear you might be doing a follow-up podcast with Ferfal focusing on the USA. I\'d be interested in Ferfal\'s take on what collapses first, what infrastructures and services were totally unable to recover, and if our dependence on just in time delivery of groceries, etc. will be our biggest Achilles heel.

You might also consider interviewing Charles Hugh Smith at http://www.oftwominds.com/blog.html and Juan Wilson at http://www.islandbreath.org/ if you haven\'t already contacted them. Juan Wilson wants to try growing local Hawaiian crops and shipping them via Polynesian outriggers, so that\'s a pretty interesting topic opener.

Incidentally, these podcasts may be your therapy, but they\'re my salvation. Cheers, Guy.

I truly enjoyed this interview. I found it frustrating, interesting, eye opening, and then a little scary. First with the frustration. Steve, you are a true intellectual. I appreciate your fresh, unrestrained analytical approach to issues.

First a little light hearted criticism: Like many wonkish, well read thinkers, you had an air of being above it all in the interview. Perhaps I am over-sensitive to this perception because I am generally frustrated with the main stream media\'s reluctance to talk raw numbers and facts with honesty. I expect bluntness from alternative, straight talking media sources.

For the first 30 minutes it was my impression that you were minimizing the potential Argentine-style challenges ahead of the United States. Both you and your guest poked at those doom and gloomers who act as if the roof is coming down. It sounded as if you were a little above it all; you have your garden, things might get bad - but they will get better. No big deal.

THEN, at the 31 minute mark you switched to preparedness. Ferfal clearly has an entirely different idea of what a \"safe normal\" is, as he described the need to prepare for armed kidnappings, roving gangs, home invasion take overs, innocent killings, barter economics, close quarter combat with edged weapons, bug out bags stuffed with arms, maps and survival goods - and basically an overall way of life that WOULD BE \"the end of the world\" to the modern suburban American.

Steve, you are even more layered than I imagined, I nearly choked when you stated that you had 14 years of military service. You are a tough cat to \"profile.\" I had you pegged for a Seattle coffee house type with a little backpacking experience under your belt and several years of volunteer work in the Peace Corps.

Your work is highly important. I look forward to every episode.

Well we all have our perspectives and biases. I tuned into you because of your appearance on Spirko\'s show. Your interview with Nichole Foss really rocked my world and made me a believer that the numbers point in a disastrous direction.

You see, Steve, the real philosophical question is do we deserve to reap the fate that we have sewn for ourselves? I say loudly \"yes.\" Unfortunately, the active crimes of our political and business leaders, along with the passive crimes of inattentive citizenry are so great that our children will pay for the sins of their fathers.